Introduction
Cardiovascular disease (CVD) is the leading cause of deaths worldwide, accounting for 17.3 million deaths per year which is expected to increase to >23.6 million by 20301. Hypertension is known to be the major risk factor for global CVD morbidity and mortality, with an estimated half of the CVD events attributed to it2. Thus, it is important to prevent, treat and control hypertension to reduce the risk of CVD events and related healthcare burden.
The Eighth Joint National Committee (JNC 8) guidelines recommend the systolic/diastolic blood pressure (SBP/DBP) to be under 140/90 mmHg for all treated hypertensive individuals aged <60 years and 150/90 mmHg for those aged ≥60 years3. Abundant evidence from Randomized Controlled Trials (RCTs) has shown the benefit effect of antihypertensive drug treatment in reducing the risk of CVD events in hypertensive patients4. However, most RCTs are subject to several limitations, which include: (1) External validity of the results5, and (2) Less duration of follow-up duration to study the long-term CVD outcomes, especially in young patients6. To address these limitations, several observational studies have examined the effect of controlled or uncontrolled treated hypertension on the risk of CVD events compared to normotensive subjects, however results were inconsistent7–12. Some studies reported that hypertensive patients with controlled BP were still at higher risk of CVD mortality than normotensive ones7–9,11, while other found no such evidence10,12.
In the current study, we investigated the association of controlled and uncontrolled hypertension, and the role of treatment, with the risk of all-cause and CVD mortality using a prospective cohort of a nationally representative sample of US adults. To investigate the disparities, we also examined the relationship by sex, age and race/ethnicity.
RESULT
Baseline characteristics
The final study sample consisted of 13,947 subjects (women: 50.8%, age range: 18–90 years). Approximately 26% were found to be hypertensive at baseline. Among them, 20.4% were treated and controlled, 27.1% were treated but uncontrolled, and 52.5% were untreated. Table 1 shows the baseline characteristics of study participants, and presents key differences in baseline characteristics by study exposure categories. There were significant differences in all baseline characteristics between four groups by hypertension status (p < 0.001). Among hypertensive participants, treated but uncontrolled hypertensive participants were found to be different from other two hypertensive groups. Approximately 17% of treated but uncontrolled hypertensive participants were non-Hispanic blacks compared to 13.8% and 13.4% of those in the treated and controlled group, and untreated group, respectively. Similarly, the average BMI, SBP and TC were significantly higher than other two groups. 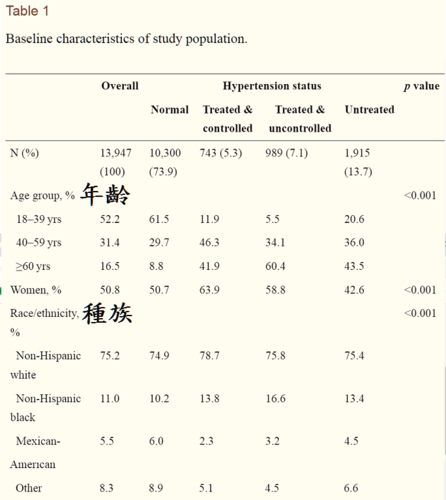 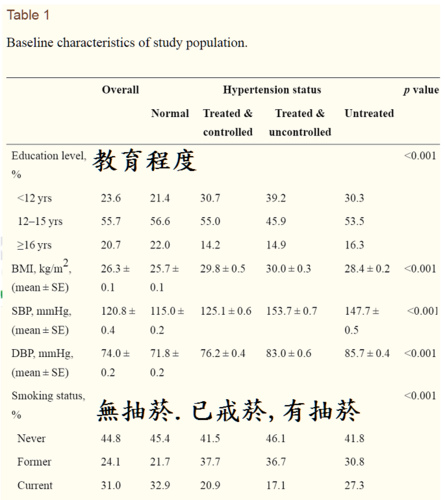 Discussion
In a nationally representative sample of US adults, we found that hypertensive adults who were either untreated or treated but uncontrolled hypertension were at increased risk of all-cause and CVD-specific mortality than normotensives. However, hypertensives who were treated and controlled didn’t have increased risk of all-cause or CVD-specific mortality. No racial, age- or sex-specific disparities existed in this relationship. While our study findings address the external validity of the relationships, they also re-emphasize the benefit and importance of adequate BP control in hypertensives, as well as the primary prevention of hypertension in the general US population.

We found that treated but uncontrolled hypertensive adults had increased risk of all-cause and CVD mortality than normotensive adults. This finding can be attributed to several reasons. First, this might be due to high risk factor profile with a majority of participants in this group being found to be either older, non-Hispanic Black, obese, diabetic or had lower educational status, and less likely to use lipid-lowering drugs, as also reported in earlier studies9,11. However, we adjusted for these confounding factors in the regression models although the potential residual effect cannot be completely ruled out. Second, patient’s non-adherence to hypertensive drugs (e.g., inadequate doses or improper antihypertensive drug types) might explain the higher risk of mortality in treated but uncontrolled hypertensives. Previous studies have reported that non-adherence to antihypertensive medications was associated with higher rates of visit-to-visit variability of BP levels13, increased hospitalization and readmissions rates, increased length of hospitalization stay and subsequent poor health outcomes14,15. Third, the proportion of resistant hypertension might be higher in treated but uncontrolled hypertensive patients. These patients usually have higher levels of SBP and have difficulty in achieving the optimal BP levels. We did not have information about the type and number of antihypertensive medications use by study participants, but the combinations of at least three antihypertensive drugs from different drug classes should be used to control this resistant hypertension16. Overall, prevention efforts should be targeted at reducing the preventative risk factors, increasing antihypertensive medication adherence rates, and combination of therapeutics to effectively control BP levels among treated hypertensive patients.

An important finding in our study is that there was no significantly increased risk of mortality among hypertensives who were treated and had hypertension controlled with antihypertensive drugs. Along with primary prevention efforts such as increasing levels of physical activity, reducing smoking and limiting alcohol use, and early screening efforts, it is important that the hypertensive adults were adequately treated and carefully monitored to keep their BP levels under check9,11. Although we did not find any sex-, race- and age-specific disparities in the relationship, efforts should be taken to increase access to care for hypertensive adults in low-income disadvantaged communities such as those residing in the CVD or stroke-belt in the southeastern United States17.

Recently, a systematic analysis of population-based studies from 90 countries showed that the global prevalence of adult hypertension was 31.1% in 2010, and the proportions of awareness, treatment, control among treated patients, and control among all hypertensive patients were 46.5%, 36.9%, 37.1% and 13.8%, respectively19. These results suggest the high burden of hypertension worldwide, with the high prevalence but low control rate. An earlier study that assessed the trends using NHANES 1999–2012 found that the prevalence rate of hypertension was stable ~30%. However, the rates of awareness, treatment, control among treated patients, and control among hypertensive patients increased from 69.6%, 59.8%, 53.3%, and 32.2% in 1999–2000, respectively, to 82.0%, 74.7%, 68.9%, and 51.2% in 2011–2012, respectively20. Still 31% of treated hypertensives did not have their BP adequately controlled. To achieve the Healthy People 2020 hypertension control goal of 88% treated and controlled hypertension, continuous rigorous efforts are needed including obesity prevention and control, health insurance expansion to increase continuity of care, and guideline-based screening, treatment and management of hypertension and related CVD outcomes19.

In our study, we used <140/90 as the target to indicate adequate BP control in both young and middle-aged hypertensive patients (<60 years) and older ones (≥60 years). It is of note that the US guidelines support treating hypertensive persons aged ≥60 years to a BP goal of less than 150/90 mm Hg3. However, the American Heart Association and the American College of Cardiology still consider 140/90 mmHg as the optimal cut-off point for controlled hypertension for both age groups, as SBP level at 150 mmHg will increase the risk of CVD and renal outcomes compared to SBP level at 140 mmHg21,22. This evidence was also supported by two recent meta-analyses that demonstrated that BP when lowered to ~130/80 mmHg or less reduces CVD and death compared to 140/90 mmHg23,24. Additionally, the findings from the Systolic Blood Pressure Intervention Trial hints about further lowering the optimal SBP level to ~120 mmHg in older hypertensive patients with ages 75 years and older25. The adoption of optimal level of SBP for older adults is still under debating, so we conducted sensitivity analyses with defining our study exposure groups using SBP of 150 mmHg as optimal level in adults aged 60 years or older, and found no substantially change in the risk estimates.

Our study has important strengths to consider. First, our study included a large number of sample survey participants representative of the US national population with the long median follow-up of 19.1 years, which makes our study findings externally valid. Second, we used mean BP values from two separate occasions to define the exposure at baseline, which are consistent with the hypertension guidelines that the clinical diagnosis of hypertension required repeated measurements on at least two different occasions3. Previous studies have used BP values collected on a single occasion7–12, which might have led to misclassification bias and over/under estimation of the effect sizes. Third, we adjusted for several confounding variables for robustness in our model, although there is still a possibility for unmeasured or residual confounding. Along the same lines of strengths, our study is subject to several limitations. First, we used BP data at baseline, and the values might have changed over time which might influence the point estimates. Moreover, no information on level of adherence to antihypertensive treatment, and antihypertensive drug type and dose (level of exposure) was unavailable, which impeded us our deeper understanding on the significant association of study outcomes in treated and controlled hypertensive adults. Future research studies should be conducted to address varying study exposure and covariates, competing risks models to address possible competing risks, and to obtain additional information on drug utilization and adherence among hypertensive adults.
結論
This study suggests that untreated hypertensive adults or those treated but not having control in the US were at increased risk of all-cause, CVD-specific, heart disease-specific or cerebrovascular disease-specific mortality. An important observation is that treated and controlled hypertensives were not found to be significantly at increased risk of mortality later in life. Our study highlights the need for multi-dimensional approach at all levels of prevention including primary prevention efforts targeting early lifestyle of behavioral risk factors, secondary prevention efforts targeting treatment, adherence and management of hypertension, and tertiary prevention addressing the adverse health outcomes of hypertension later in life.