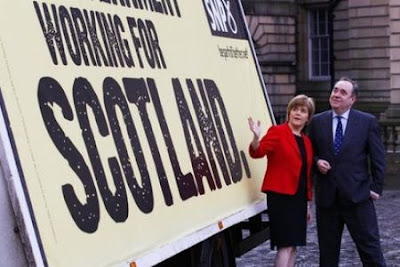 The Scottish election campaign has entered its final peaks as voters prepare to cast their ballots on Thursday amid mounting calls for Scotland's independence from the UK.
蘇格蘭競選已進入最後的山峰，在選民於週四投他們的票正值堆積如山的呼籲蘇格蘭從英國獨立。

It is the fourth election since Edinburgh's Holyrood powerhouse was formed in 1999, with main contender Alex Salmond promising to hold an independence referendum by 2015 if he wins Thursday's polls.
它是第四次選舉自愛丁堡的荷里路德廠房成立於1999年，有主要的競爭者亞歷薩爾蒙德承諾，於2015年舉行一次獨立公投，如果他贏得週四的選舉。
The First Minister of Scotland claimed during a leaders' debate at the state-run BBC that victory in May 5 election would give him “moral authority” to pursue independence.
蘇格蘭第一部長在一次國營 BBC的領導人辯論中聲稱，5月5日的大選勝利將會給他的“道德權威“去追求獨立。
Salmond said he wanted the Scottish people to vote on breaking up the UK "in the second half of the [upcoming] parliament."
薩蒙德說，他希望蘇格蘭人民“在[即將來到]議會的下半場表決英國的分裂。“
"I believe this country is good enough, big enough and rich enough to be independent”, he has said earlier in an independence rallying call.
“我相信這個國家是足夠好、足夠大和足夠富有去獨立“，他較早時在一獨立的集會號召中說。
However, Salmond's call for an independence referendum has been dismissed by Iain Gray, the Scottish Labour leader, who put the economy as his party's first priority.

"The priority is to get our economy growing again, to create jobs and to create opportunities for our young people,” said the Labour Party candidate.

After all, Scotland's four main party leaders fielded questions on free bus passes, tuition fees and Scotland's drive to generate more green power. Meanwhile, they all agreed that it was necessary to tackle bigotry and religious hatred at a national basis.

The Conservatives and the Liberal Democrats will both start the day on a high, with Tory leader Annabel Goldie unveiling a giant peach ballot paper on Edinburgh's Calton Hill to urge voters to back her party on the peach-coloured second ballot.

The latest TNS-BMRB poll put Alex Salmond on course to form the second SNP Scottish government. The survey puts the party 18 points clear of nearest challengers Labour in the constituency vote and 13 points ahead in the regional vote.

MSPs have responsibility for matters including health, education and law. Other issues such as foreign policy and defence remain reserved to MPs at Westminster in London.