SEATTLE -- Chien-Ming Wang was so dominant breezing through the Mariners lineup for six stress-free innings that by the time he ran into some trouble in the seventh inning, it didn't really matter. The Yankees righthander had already made his statement.

In pitching the Yankees to a 9-2 win, their sixth in seven games, Wang proved to any doubters that his recent stretch of down starts was likely a fluke, and that he is still going strong late in a season in which he has thrown far more innings than ever before.

Wang's first six scoreless innings last night were free and easy, and he looked a lot like the efficient pitcher who was the staff's ace for a six-week stretch this summer. He improved to 15-5, and with at least six starts left, he has an outside shot to win 20.

"He was back to his old self," manager Joe Torre said.

Nobody expected this kind of season from the 26-year-old righthander from Taiwan. "I think we were expecting 13-10, eat up some innings," Johnny Damon said.

Wang hit a bump during the seventh, giving up two runs and four singles, but his final line – two runs, seven hits and no walks in seven innings – was a big improvement over his previous three starts when he gave up a total of 12 runs spanning 16 1/3 innings.

"Today, sinker down," Wang said. "Last three it was flat."

In support of Wang, the Yankees offense pummeled the Mariners' young up-and-comer, righthander Felix Hernandez, 20, who gave up seven runs in only 3 2/3 innings. Robinson Cano drove in three runs and Damon, Jason Giambi and Jorge Posada each added two RBIs as the Yankees cruised using their usual patient, drawn-out attack.

Tonight, Randy Johnson opposes Jarrod Washburn in the series finale, after which the Yankees will head south to Anaheim for three games to finish the three-city road trip.

The Yankees' offensive explosion was especially surprising given that they weren't exactly looking forward to facing Hernandez, with good reason. They all recalled how tough he was when they faced him last August, in only his sixth major-league start.

But the dazzling hard-throwing rookie who had a memorable eight-inning outing despite a 2-0 loss that night was nowhere to be found last night. The Felix Hernandez on the mound last night was wild, consistently behind in the count and rather hittable.

The Yankees pounced on him with a five-run fourth inning, knocking him out after their ninth hitter of the inning, Jorge Posada, hit a grounder off the glove of second baseman Jose Lopez and into centerfield, plating Bobby Abreu to extend their lead to 7-0.

Hernandez's final pitching line read seven runs, nine hits and four walks in 3 2/3 innings, the shortest outing of his bright young career – and definitely his worst one, too.

As Wang was breezing through the Mariners lineup, Hernandez was falling behind in counts, constantly playing catch-up, it seemed. Robinson Cano's two-out, bases-loaded single through the middle in the first inning opened the two-run lead.

Giambi impressively scored from second base on the play, a remarkable feat given his lack of speed. "I told Bowa if he did it again he gets a week in Hawaii," Torre said.

And it fell apart for Hernandez in the fourth, beginning with a four-pitch walk of Robinson Cano, just Cano's fourth walk in 17 games since he came back.

After Melky Cabrera blooped a single, Hernandez struck out Craig Wilson for the inning's first out. But Nick Green, starting in place of Alex Rodriguez, who has a throat infection and fever, singled to right to load the bases for Johnny Damon, who loves those situations. He came into the at-bat with nine hits in 15 at-bats with the bases loaded, and came through.

Damon lined Hernandez's first pitch to right-centerfield, driving in the Yankees' first two runs of the inning. And when the throw from Chris Snelling bounced away from second, Damon hustled to second, putting two men in scoring position with only one out.

The Mariners, trying to give their young pitcher every chance to get out of the inning, saved a run when Derek Jeter grounded to shortstop Yuniesky Betancourt, who was on the edge of the grass and had more than enough time to get Green at home. But even when something good seemed to happen to the Mariners, they couldn't capitalize.

Hernandez walked Bobby Abreu and Jason Giambi lined a ground-rule double down the rightfield line, plating Jeter and making it 6-0. Posada followed with his RBI single that made it 7-0, one that officially ended Hernandez's forgettable evening. 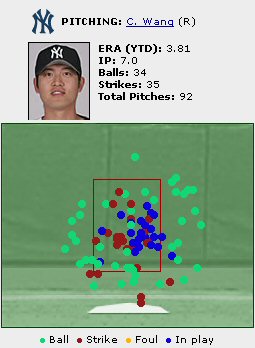