CNBLUE @ The Muzit filmed on July 14 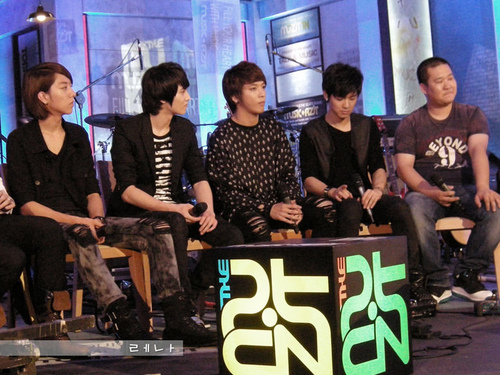 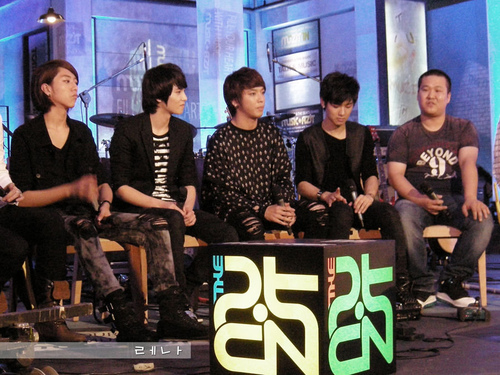 What the heck? 3AM – 4:30 AM? Filming time… It’s amazing they still look awake and lively. CNBLUE Fighting!

First stage was Charice Pempengco from the Philippines.
She filmed Star King with CNBLUE too, she is 18 years old.
She sang 3 songs, Listen, Endless love(with Kwill) and Pyramid.
There was a handsome face at side looking at the stage secretely. It was Jong Hyun.

Finally CNBLUE’s turn. They didn’t have rehearsal, so all the people should go out.
But there was a monitor outside, and could hear all sound.
Fans were happy to hear their rehearsal sound, and could see what songs would be performed.
People were waiting outside, first Jong Hyun then Yong Hwa came out to go to the rest room.
Fans promised to request ‘Umbrella’ if they could request encore.
after 30 minutes rehearsal, all went inside again. This time CNBLUE fans were seated at front center seats.

— 01 LOVE
After the first song LOVE, the host Yoo Young Seok went out shouting “Wow you guys did really great job!“
He is a popular composer, singer song writer, also was the leader of 1988~1997 legend band ‘푸른하늘(Blue Sky).
(I have all of Blue Sky’s CDs, all are my treasures, I’ve been their concert.)
CNBLUE members were so pleased to hear this praise.

Yoo: Yong Hwa and Kwill have met at acting institute?
Yong Hwa: Yes, I was staying at my acting teacher’s institute to prepare You’re beautiful. There was Kwill there.

Yoo: Acting. Do you still have desire of acting?
Yong Hwa: Yes, together with music. I found music and acting have common things.

Yoo: How about other members?
Min Hyuk: We have same thoughts.
Jong Hyun: Both are arts. We are learning together.

Kwill: Your musical ability is being shaded by your good looks. How do you think about it?
Jong Hyun: I don’t think so. We have long way to go. We will keep practicing hard from now on.
Jung Shin: If we work hard continuously, people must get to know us some day.
Jong Hyun: (to Jung Shin) That’s what I used to talk at radio shows!
Yong Hwa: haha you know… we have fixed comments for each member. It’s still the same from 1st album.
Jung Shin: (to Jong Hyun) That was what I put into your brain while you’re sleeping!

Yoo: You won hits one after another. You must had hard time before debut, but people may think you became popular in one day.
Jong Hyun: Actually, we’re going to go up step by step practicing slowly. But we stepped up too much suddenly.
Yoo: That’s good! Who want to go up slowly? Everybody wants to step up in one time. But he can’t, so he’s going slowly.
Kwill: But Mr. Yoo you did great success as soon as you debut.
Yoo: I could succeed because I didn’t show my face.
Kwill: It is I who is going slowly for 10 years. It’s a real torture.

Yoo: You have vocal cord nodules? Oh my. Good care, that’s most important. Do you smoke or drink?
Yong Hwa: No no. I’m trying not to speak in normal times.
Yoo: Then it’s because of your singing.
Yong Hwa: We are band. The amp sound is loud always. So I tend to sing loudly too.
Yoo: That’s it. My vocal cord nodules was because of fight between me and wife. Do you have other trouble?
Jung Shin: We have a wish. We want to be grandfather band together. I’d like to ask you an advice how we should keep it.
Yoo: Two things, money and woman. That’s the only reasons which break up the band. First, money issue should be transparent, no secrete should be occur. All must know who brings how much. Second is woman relationship. Don’t lust for someone else’s woman. How about you? You all four look so popular to women.

*Such a good advice Mr.Yoo

Kwill: Which is more serious between two?
Jung Shin: I think the money… could be more serious.
Yoo: Oh, it is started already!
Jung Shin: No, not that!
Yong Hwa: You were hiding something. That’s why you never open your room door. When I opened the door, you were startled.

Yoo: How is your ideal type of woman? Is it same or different? Actually, handsome guys like them are not picky about girls look. An ugly guy like me aims high. (Yes, his wife is Miss Korea.)
Jong Hyun: Recently we all are interested in who wear baseball cap on long straight hair. My ideal type is ‘The prettier the better’.
Fans: Boo~
Jong Hyun: Why? You like handsome guys too, don’t you?
Yong Hwa: In the car looking outside, Jong Hyun used to say “Wow that girl is cool, isn’t she?” Jung Shin says, “Who? eee not really”. Min Hyuk never pay attention to such conversation, just listens to music through headphone or sleeps.
(I am just enjoying their conversation.)

*Wah! Jonghyun >_< Minhyuk lovers must be really happy cause Minhyuk doesn’t pay attention to such conversation. LOL. Are you?

Yoo: Wow, I hope CNBLUE release a song of this style. Isn’t it so good?
Kwill: You must have sung this song a lot since you’re trainee.
Yong Hwa: We’ve sung this song for years and it’s our favorite song.
Yoo: The song you like and the song you release can’t be the same. You must keep effort to make your favorite music be popular to all people. Do you like rainy day?
Min Hyuk: Yong Hwa likes it.
Jong Hyun: I hate rainy day.
Yoo: I know the reason. women hold up umbrella…
Jong Hyun: Uh? I’m not that character.
Jung Shin: I don’t like rainy day either. I hate sticky feeling and holding up umbrella.
Yoo: Why do you like rainy day, Yong Hwa?
Yong Hwa: For me, good weather means rainy day, a heavy raining day. Just cool, feel good by just looking at. It sounds good too. On rainy day, watching TV, eating ramen… I jut love those feelings.
Yoo: People who like rainy day know that precious feeling. Min Hyuk, why do you like rainy day?
Min Hyuk: First, I like the sound of rain. This sound makes me feel like my mind is cleaned. I like to be exposed to rain too.
Yong Hwa: The weather I hate most is raining from sunny sky, a sun shower.

Yoo: CNBLUE invited their guitar teacher.
Jong Hyun: From trainee days, he is giving us carrot and stick. I’m learning from him so much. He is still giving me good advice. Let me introduce him. Guitarist Lee Kyung Won!
Yoo: Welcome. You seem to give both carrot and stick. Maybe more of stick…
Jong Hyun: I received carrot more.
Yoo: How were they? Did you see good sprout from them at first?
Teacher: Yes I did. Actually I was confident that they would succeed. Jung Shin was so tall. He was wearing a high hat like G-Dragon. He looked like a basketball player. But as I looked him closely, he was so handsome. The first person I saw was Jong Hyun. He bowed me 90 degrees.
Yoo: He must be afraid of you.
Jong Hyun: Yes, I couldn’t help but doing that.
Teacher: He looked so well-mannered. Min Hyuk was so introvert. He hardly spoke. If I said something, he became shy. I saw him on TV, He was MC. I was so surprised. And Yong Hwa, he had various talents. He even acted while practicing guitar. I thought he could succeed with acting. But Yong Hwa didn’t practice guitar hard.After lesson, these boys gave me massage. But Yong Hwa was practicing dance in front of big mirror on the wall. That dance was techtonic. I found Yong Hwa was a good student practicing other things hard except guitar.
Fans: Show me! Show me!
(Yong Hwa danced techtonic. He was a good dancer)
Jong Hyun: Yong Hwa is interested in hip hop a lot. He is practicing DJing. He is good at it.
Yoo: Who is most musical? Who has biggest desire of musician?
Teacher: The person who has musical talent most is Yong Hwa. The person who practice hardest is Jong Hyun.
Yoo: Do you contact often?
Teacher: Yes, Jong Hyun calls me once a week. One day, Jong Hyun told me that there were bad comments in internet, he was depressed by it. I told him that bad comment is better than no comment. That is a kind of expression of interest and love. I personally think that in a band, one has 100 of ability and others have 10, it’s not a good band. CNBLUE has no member of 100 points yet. But they can be 100 in the future, and all have average of over 30~40 points. It’s best for a band, good for harmony, no quarrel. This band can be a successful band.Although their bowl is not full yet, it’s enough they have big size bowl. They have ability to fill it. Please encourage them a lot.
Yoo: I am the person who speak ill often. But I don’t criticize other performer’s performing ability. Those are all who can’t play musical instruments. That’s not desirable.

— 03 Isn’t she lovely : Guitar Duet with Jong Hyun and his teacher.

Yoo: Wow, teacher is a teacher! Your rhythm is so stable. You guys have very good teacher. How was it Jong Hyun?
Jong Hyun: I’ve never trembled at TV broadcasting. It’s my first time in my life I trembled this much.
Yoo: It was Jong Hyun’s solo performance, and the teacher supported you by solid rhythm.
Teacher: I trembled more.
Yoo: Why don’t you say a word to your teacher.
Jong Hyun: I really appreciate you. I’m visiting him every other week. He always teaches me and advices me.
I ask you good lessons from now on.
Yoo: Why don’t you say a word to your students.
Teacher: You are doing very well. I heard your rehearsal sound. It was good. I hope you guys have easy mind and go slowly. It is not 100m race, it’s a marathon.

MC Yoo said that CNBLUE is the last turn, fans can request encore freely.
So fans shouted Umbrella!! Yong Hwa immediately accepted it, did a hand motion to Min Hyuk.
Min Hyuk immediately started drum, it was the beginning, so quickly.

Many thanks to saturn.@soompi for sharing. It was such a good read.

Enclosed in () are saturn.@soompi’s opinion. Text in green is my opinion.
Credit: saturn.@soompi.
Thanks to Sap a.k.a. parkjimin@soompi for sharing the photos!
Photo Credit: Unionpress.
Re-uploaded and Re-posted by Lyna@cnbluestorm.