?Theatre劇場-Spies嬌娃
Eliza 和湯姆通完視訊不久後，就聽到有人敲門。
Not long after Eliza's video-call with Tom has ended, someone knocked on the door.
她去開門後發現原來是一個帥哥在敲門！
When Eliza went to open the door, she was astonished to discover a handsome boy standing behind the door!
突然，帥哥開口說：「妳好，我叫 Freddy，我是總部派來協助妳的探員！」
The handsome boy said: "Hi! My name's Freddy, I was sent from the headquarters to aid you!"
Eliza 心想：「哼～我和 Claire 一向都是一起合作的，從來也不需要其他人協助，雖然這次 Claire 失蹤了，我相信依我的能力也能自行偵破此案，根本不需要甚麼協助。湯姆太看不起我了！不過，既然他派了個帥哥給我，我這次就暫時不和他計較，呵呵！」
Eliza thought to herself: "Huh! Claire and I have always been partners and we never needed anyone to aid us! Although Claire has disappeared, I believe that I could solve this mystery all by myself, without any help. Tom must have underestimated my ability hugely! However, since he sent a cute guy to help me, I would forgive him for once, hehehehe!" 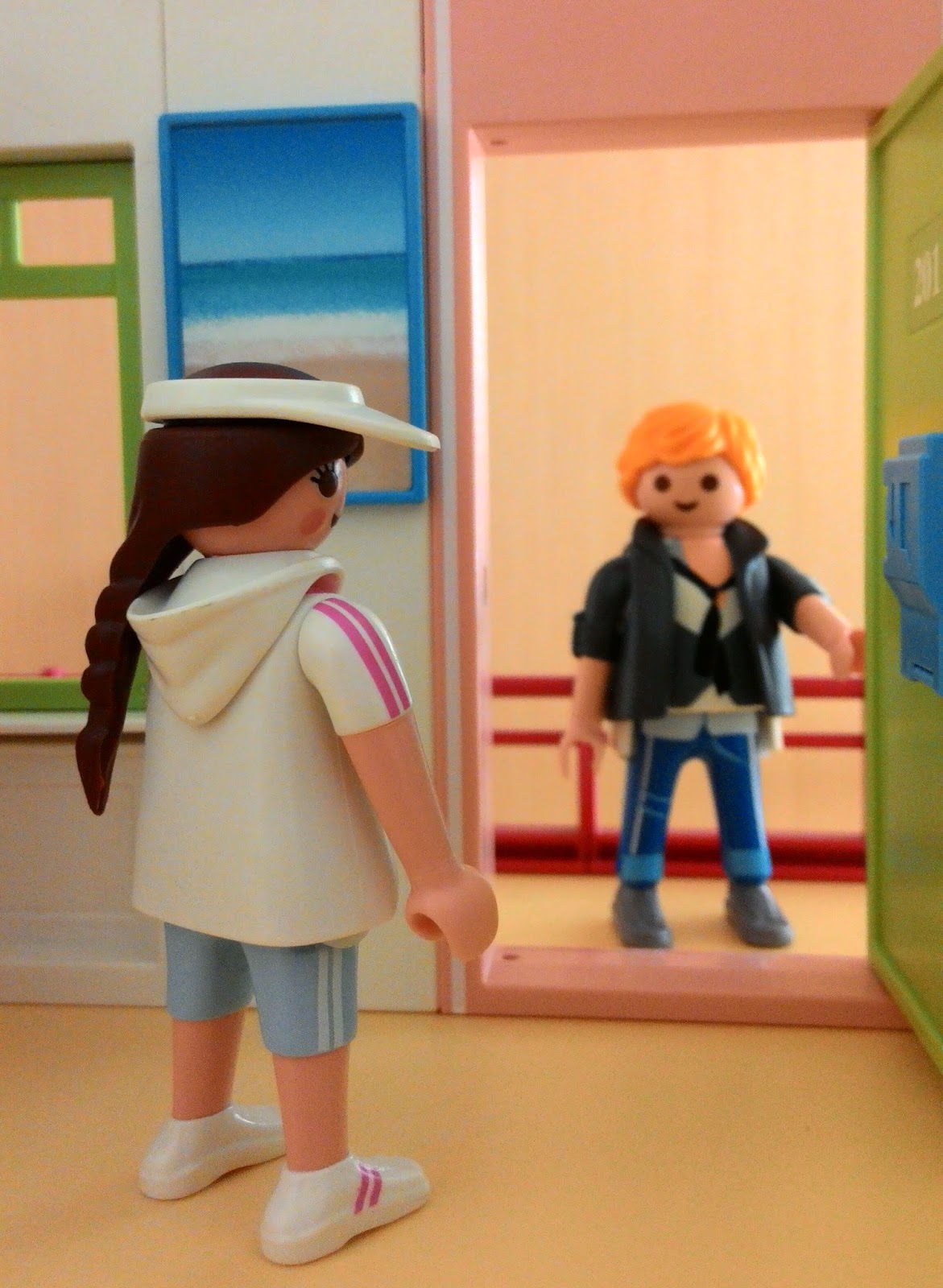 After Freddy has entered the room, Eliza said: "Why don't we change into our uniforms, it would help us with the investigation!" and she took out her Contact Mirror, ready to click a button and change.

"Great idea!" Freddy said as he took out his watch, from the projected screen, he selected a button.

Eliza thought to herself: "Huh, this is unfair! Tom gave Freddy such high technological gadgets and gives me and Claire a stupid mirror! Where are we supposed to store it in!? I would love to have such a watch, which would certainly make everything much more convenient for us!" 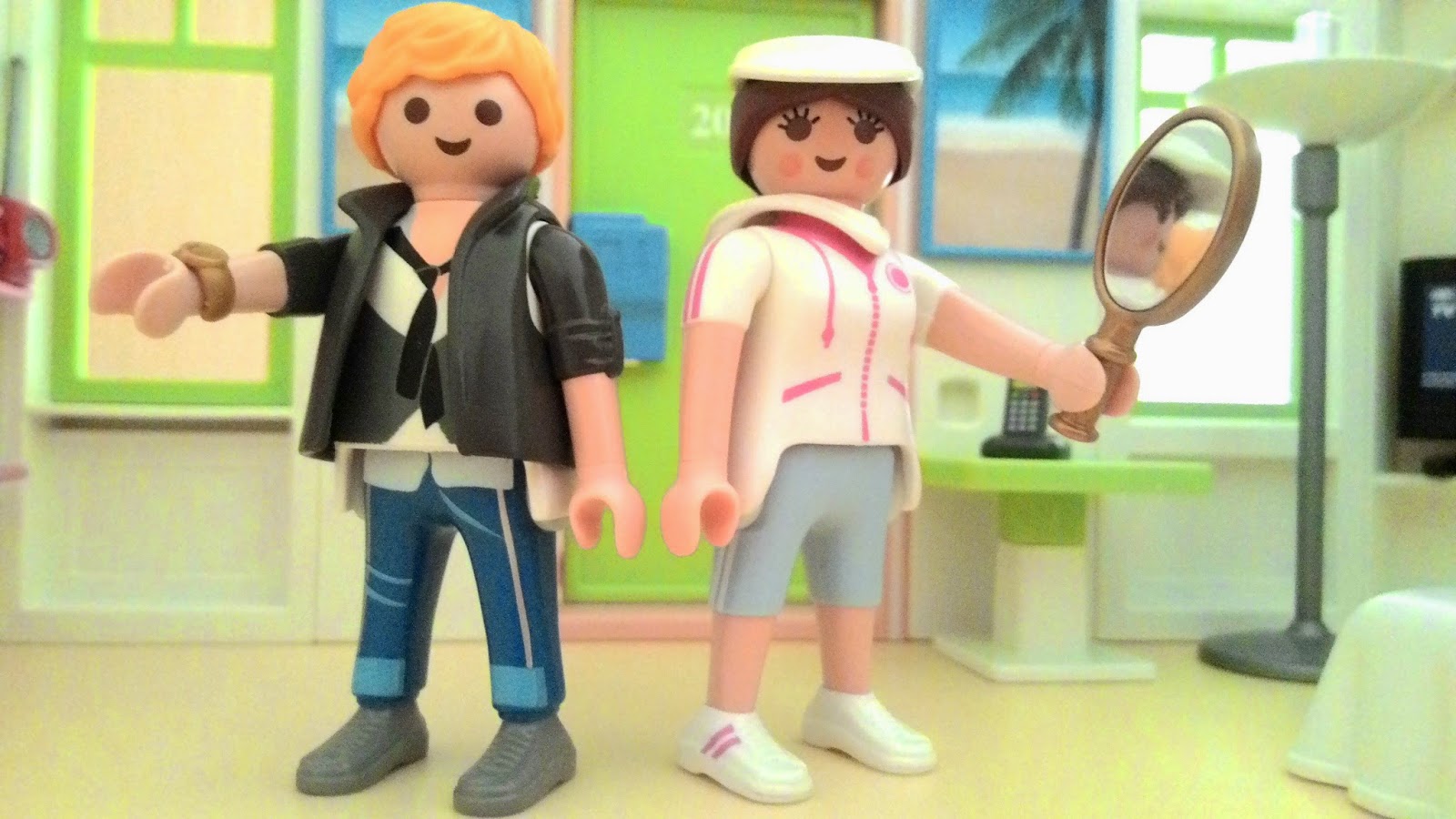 In a blink of an eye, they have changed into their outfits!

Eliza took a small glimpse at Freddy's costume, and bursted into a laugh. As Freddy's outfit was extremely funny, a black outfit with fluorescent green lines for decoration, red boots and a "S" symbol on his chest, exactly like a funny superhero outfit!

"Wow! What kind of outfit is this? It's........so special! Hahahaha!" Eliza said as she nearly laughed her head off.

Freddy replied: "Do you think I like this outfit? No! The headquarters told me to wear it, I have no choice at all!" 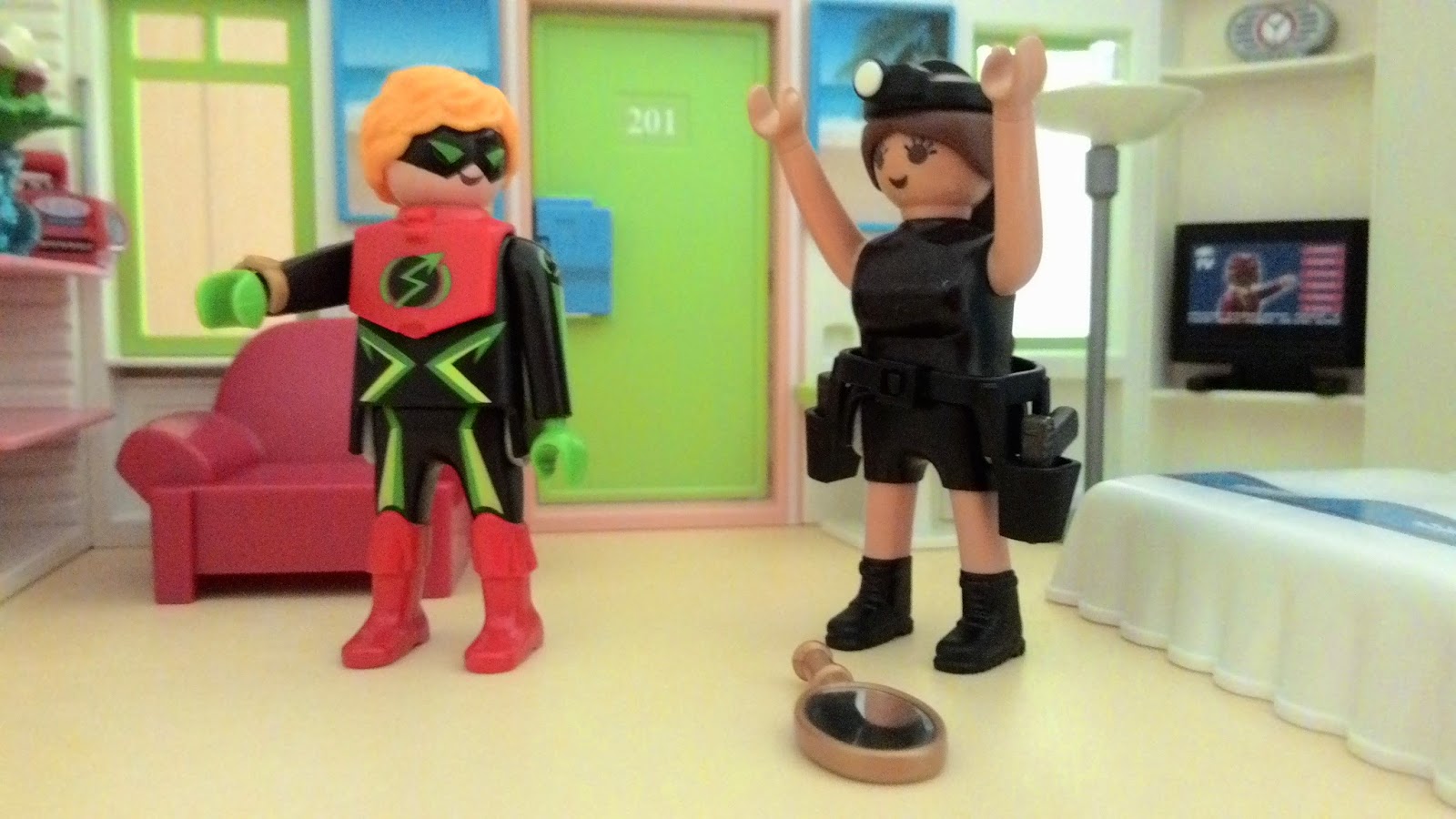 After they've finished changing, Eliza and Freddy started examining the room for clues.

Eliza took small glimpses at Freddy whilst looking for clues, and started to giggle to herself.

She thought: "Tom still treats us better! At least he doesn't tell us to wear that outfit! If he tells me to wear something like that, I would rather quit! However, although that outfit is hilarious, when it's put on Freddy, it's actually quite fashionable. Hmmm, it must be because he's too cute! Hehehehe!" 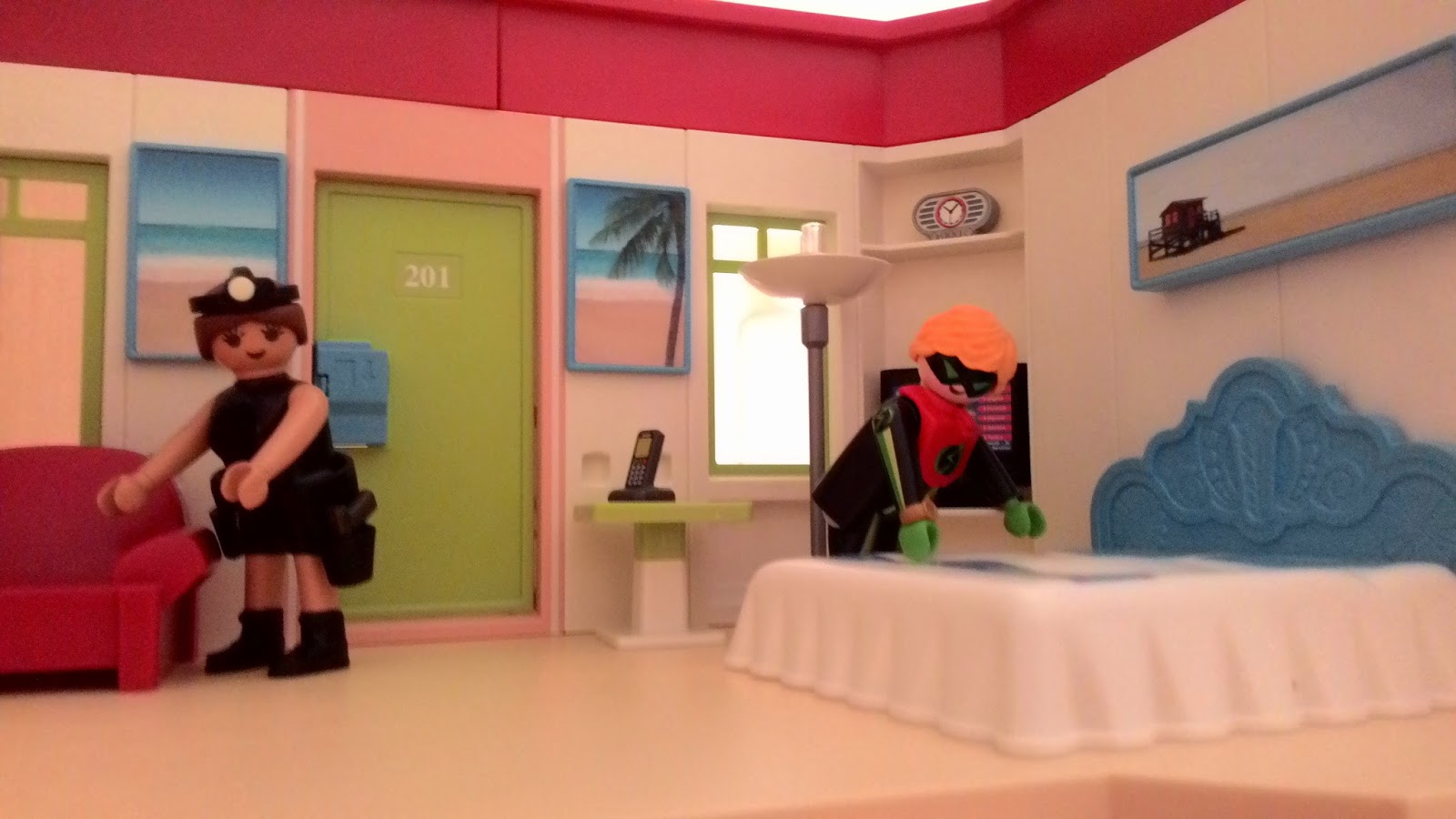 Suddenly, Freddy started and Eliza dashed to take a look. He discovered a piece of cloth sandwiched between the bed and the bedclothes.

"According to the colour and texture of the cloth, I think that it must have came from Claire's dress!" Eliza exclaimed. 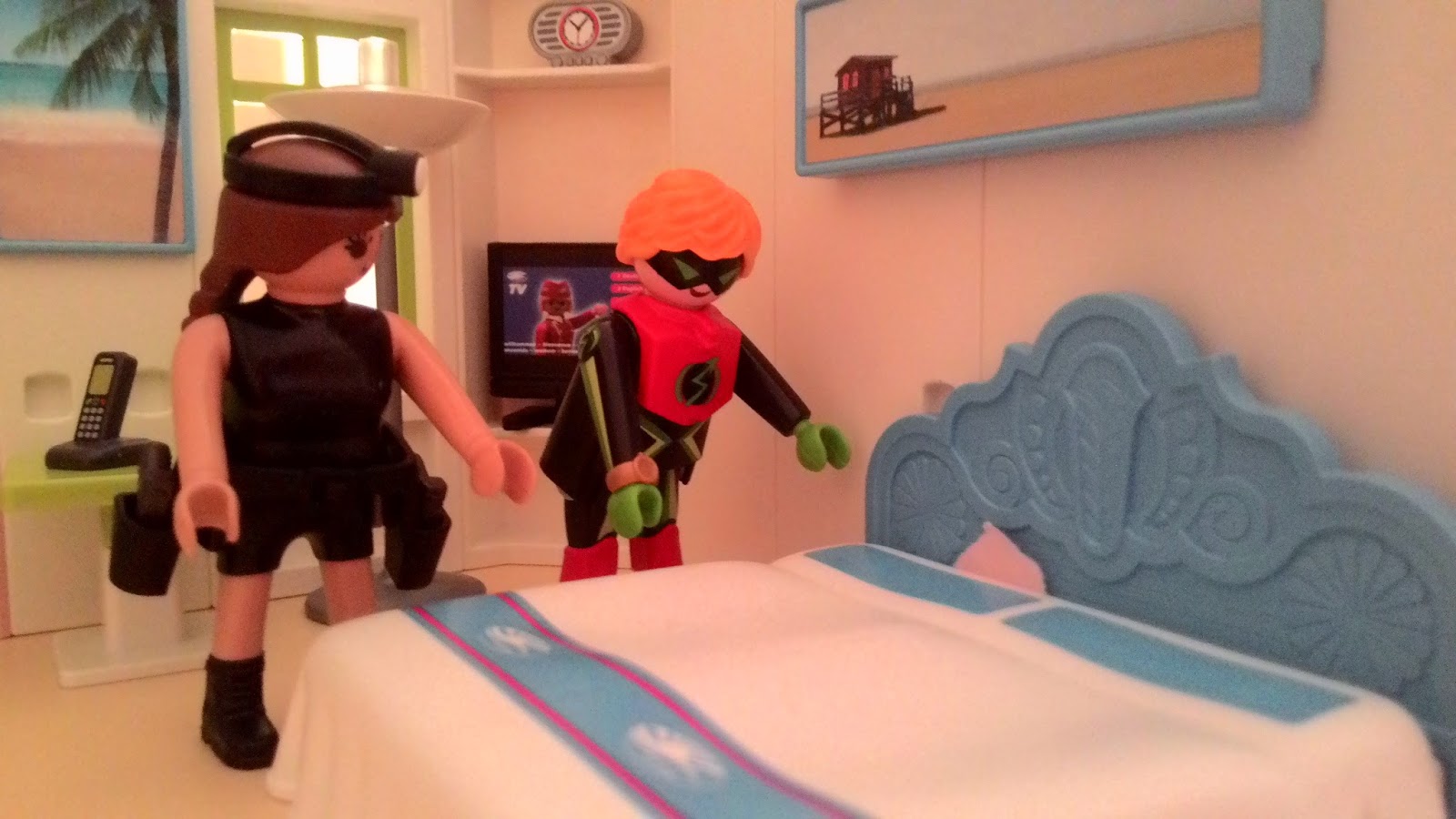 When Freddy tried to pull the piece of cloth out, the bed suddenly changed position and revealed a huge hole. A strong force of attraction pulled Eliza and Freddy into the hole! 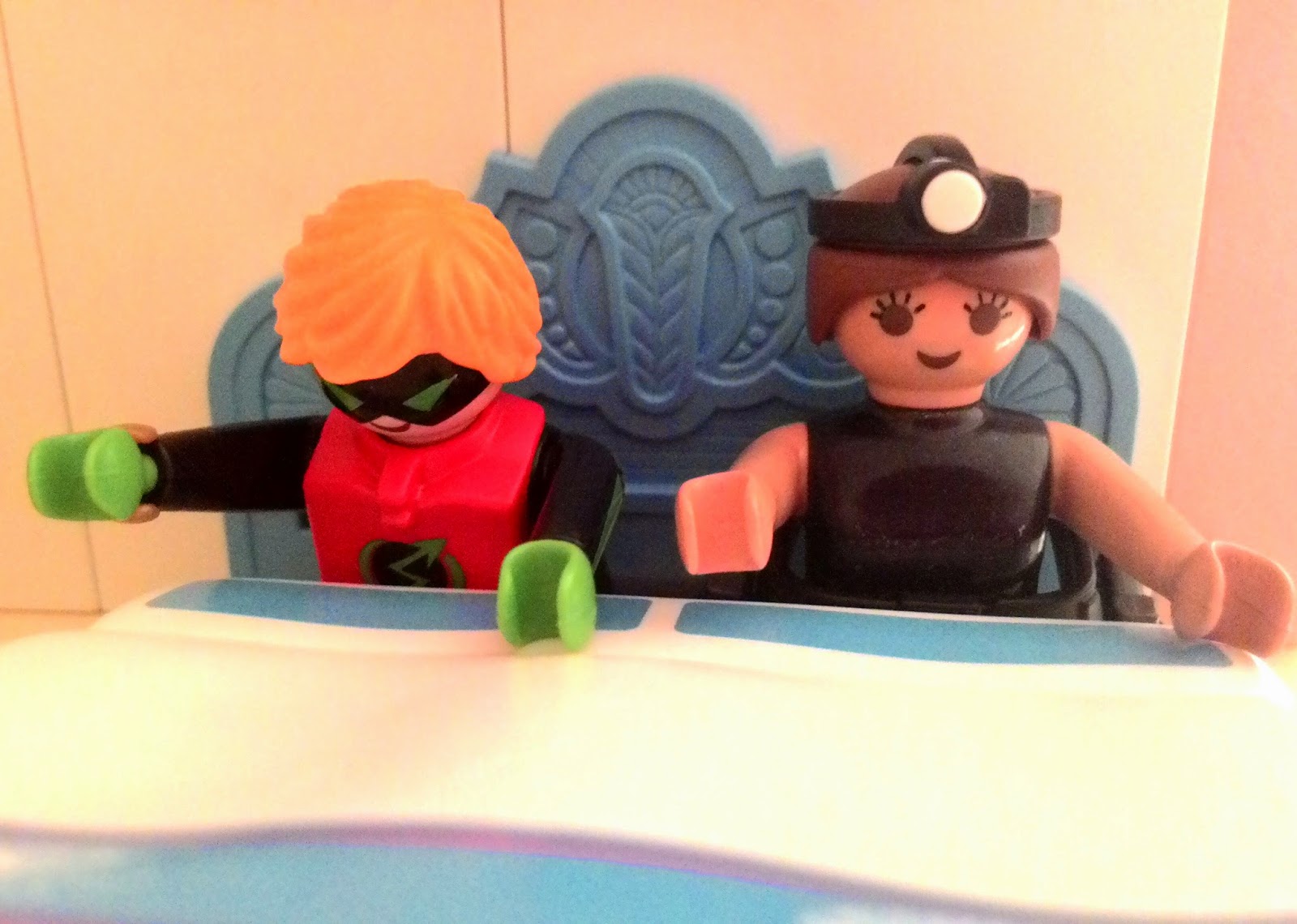 What is waiting for them in there?